skip to main | skip to sidebar

Ali surprised me with the coolest present about a month ago: my very own p8tch, which is basically a velcro patch with a unique QR Code that can be linked to the URL of your choosing. Here's mine, attached to the shoulder strap of my bag: 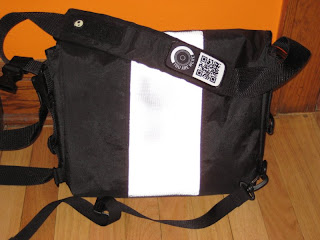 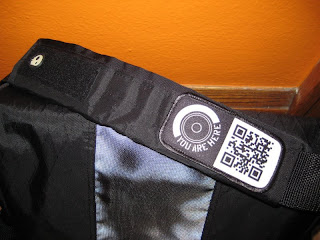 I am tickled by this present for a number of reasons: first, it is incredibly geeky. The p8tch site itself refers to these as
COMMANDO NERD PATCHES FOR IPHONE AND ANDROID SCANNING.
Second, I had never heard of these, or QR Codes, before! And for someone who is so on-line and as much of a consumer of geeky things as I am, that was no small accomplishment on Ali's part. Third, I am fond of patches. And this one, with its unique QR code, is all my own.
So, what are these things good for, and how do you use them? The p8tch site suggests thinking of them as wearable TinyURLs. The QR Codes themselves, 2D cellphone-readable barcodes, are being used for things like Semapedia tagging. But you can tag and link to anything with a QR Code. There are plenty of QR Code generators out there, making it easy for you to make your own. (The p8tch is simply a nice vehicle for a QR Code, plus it includes access to a server that maintains the redirect from the p8tch QR Code to the user-definable, and re-definable, URL.)
My first (and so far, only) QR Code sighting was on a sign for the Games, Learning, and Society Conference 5.0 which took place in Madison earlier this month. I was so excited! A real-world sighting! I felt like I was on an impromptu treasure hunt, waiting to see what the QR Code that I scanned would link to. Hmm. A webpage for comments. Kind of like a guest book. I was guest #2. Well, it was only the first day of the conference, maybe others would join in...yeah, you'd think that at a conference dedicated to interactive learning, specifically using digital media and videogames, that more attendees would be clued in to something like this. Huh. I checked again just a little while ago, and there are still only two posts...
I came across a blog entry, pretty dated now, which tries to argue that "Mainstream America is Ready for Bar Codes." You need to know two things when reading this. First, the writer, David Harper, is founder and CEO of winksite.com. Second, when he quotes August 2005 survey results regarding awareness and usage of QR Codes, he is--and I am assuming this, but believe that I am assuming correctly--talking about results of a survey conducted IN JAPAN. I don't know if he left this detail out on purpose. Regardless of the intent behind it, it's sloppy writing. Yes, trends (like texting) that first took off elsewhere have made their way here to be fully embraced. But that doesn't always apply. Vending machines that serve ice-cold beer, for example, are still absent here in the US.
I don't know if QR Codes will catch on here. I do know that the tipping point, for QR Code awareness and usage, has NOT been reached yet. Harper's blog entry is from March 2006. Here's another interesting WinkSite reference in a Dave Winer blog post from May 2007. (I am learning so much as a result of talking about my p8tch! For example, Dave Winer's blog, Scripting News, is one of the oldest webblogs around!) Note the mention of both WinkSite and Twitter in the same post. Before I started down the rabbit hole opened up by my p8tch [if I neglected to say this, Thanks for my p8tch, Ali!], even before I wrote my first blog entry [see previous entry], I had heard of Twitter. But WinkSite?
The difference in--is it consumer awareness? not sure of the term I want here--between Twitter and WinkSite provides a neat little illustrative test case for a tool recently launched by yet another startup, YouNoodle. They've created a global startup tracking system that provides a YouNoodle Score (0-100) for a startup company based on "a startup's impact and importance based on its traction, activity, and buzz." Here's how WinkSite and Twitter compare:

At this point, QR Codes have very little to do with the discussion. As far as I can tell, QR Codes are a very handy way in, but are not central or essential to what WinkSite is trying to do.
What are the crucial differences between the two? Why are there articles like this one about Twitter, but not about WinkSite? Is it just a timing issue or is it something more intrinsic?
Posted by vilin at 9:00 PM

vilin
(3) In city, in suburb, in forest, no way to stretch out the arms--so if you would grow, go straight up or deep down.
--Denise Levertov, "The Runes"